Things haven’t gone quite as expected this season for John Paxson, Gar Forman, and Jim Boylen. After receiving praise around the league for off-season roster moves that brought Thaddeus Young, Tomas Satoransky, and Luke Kornet to Chicago, many thought that the Bulls could make a push for a low-seed in the playoffs in a weak Eastern conference.

The results so far have come nowhere close to satisfying the hype bestowed upon the Bulls from fans and interested onlookers alike. There is no way to put it lightly, the Bulls have been terrible this year. The team has only beat two teams with records of .500 or better this season — the (at the time) injury-ridden Los Angeles Clippers and a Dallas Mavericks team missing Kristaps Porzingis. A winning record is out of the question and the Bulls look extremely unlikely to make the playoffs — fivethirtyeight.com gives the Bulls a <1% chance to qualify. So what is left to play for with less than a quarter of the season remaining and one of the most difficult schedules in the league?

Development is going to be crucial for these Bulls. As much as fans like to chide Paxson for his excuse-proffering ways, he’s correct when he says that injuries have limited the front office’s ability to assess the core. That core, consisting of Zach LaVine, Lauri Markkanen, Otto Porter Jr., and Wendell Carter Jr., have only played 251 possession together per Cleaning the Glass. Each guy has question marks over how they will fit on both ends when the Bulls are at full strength. We also don’t know what role Coby White will play once the team is fully healthy. Since the rest of the season will be a crucial chance to assess what the Bulls having going forward, it’s important to go through what each guy can do to stake his claim and to give Bulls fans hope going into the 2020/21 season.

Wendell has had a tough season in many ways, but he has shown he can succeed despite being used in a way that does not highlight his strengths. On the offensive end, head coach Jim Boylen has chosen to utilize Wendell as a classic screen and roll big. Wendell is mostly used as the roll man in the P&R, with 65% of his shots coming at the rim per Cleaning the Glass.

However, Wendell can do so much more than be a brute force down low. He showed a nice looking stroke with the ability to stretch the floor at Duke, shooting 41.3% from 3 (albeit on a paltry 2.6 attempts per 100 possessions per Basketball Reference). Wendell realizing his potential will require him to stretch the floor to some extent. While he has shot poorly from 3 thus far in his Bulls career (19.7% on 1.3 3PA per 100 possessions per Basketball Reference), his stroke looks good and his 76.2% free throw percentage is solid if unspectacular for a big. Wendell should be put in position to shoot when open during the remaining games and it’s important that he take those shots when they’re available.

Wendell can also do more as a passer. His vision and passing ability were highly touted coming out of college with some scouts comparing him to jack of all trades big man Al Horford. Jim Boylen should give Wendell more opportunities to run the offense from the elbow and to get creative as a passer. Big/big P&R sets with Lauri Markkanen and short roll situations could get WCJ’s playmaking juices flowing and unlock the stagnation that this offense is prone to whenever Zach LaVine can’t get himself a bucket.

Lauri has had maybe the worst season of any core Bulls player this year. Even when healthy, Boylen has restricted Lauri to a role as a spot up shooter from 3 without allowing him to go to work and show his playmaking ability off the dribble. What made Lauri special in the draft was his silky stroke for a true 7-footer, but to get the best looks, Lauri relies on his ability to put the ball on the deck and make plays.

Going forward, Lauri will need to be given opportunities to grab and go in transition. In addition to that, Boylen and top assistant Chris Fleming will need to do a better job of getting Markkanen a more diverse diet of looks within the half court offense. Allowing Markkanen to run in transition, running him off screen action, and even using him more often as a roll man will help Lauri to get back to his best and show Bulls fans that they were right to praise him so highly after surprisingly productive rookie and sophomore seasons.

Zach LaVine has silenced critics by remaining mostly healthy and continuing to improve on defense (even if he’s still prone to frequent lapses off-ball). He’s maintained his scoring abilities while dragging a depleted Bulls roster to wins it could not have gotten without him. So what can Zach do to be even better?

LaVine may have missed out on the all-star game this year despite his professed goal to make the squad for his first career appearance. However, his offensive game continues to improve and he’s often the only Bull capable of getting a bucket when the offense stagnates. One way that he could improve as an offensive player is to expand his game by becoming a better on-ball playmaker.

Any viewer can tell that LaVine has taken on a greater responsibility as a playmaker with the ball in his hands, but the results have been mixed with Zach turning the ball over far too frequently for a primary option. With fewer than 20 games left to play, he should focus on developing his passing ability. His vision can be solid and his skill in going to the rack or pulling up in transition makes him unpredictable with the ball in his hands, but turnovers have been a problem. Zach just needs to make the right read and stop trying to do too much and his passing will be a positive in no time. Having better players alongside him should help to mitigate the feeling that he needs to do it all himself.

Otto has had the worst of the injury luck this year, missing almost the entire season thus far with a foot issue that ended up being worse than originally reported by the Bulls medical staff. The result has been that the Bulls still don’t really know how he fits with the rest of the core. The big thing to assess with OPJ going forward is how he fits with Zach, Lauri, Wendell, and Coby.

We can be pretty confident that Porter Jr. will opt into his lucrative $28m player option next season. With that in mind, the Bulls front office and coaching staff need to figure out how to make the best use of his talents to augment the play of the young stars going forward. Otto is an efficient spacer of the floor and the kind of guy who unlocks lineup options. He can play either the 3 or the 4 in most lineups and his 3pt shooting ability opens up space for guys like LaVine and Coby White to go to work. On the defensive end, OPJ remains one of the most capable wings at guarding the best of the best. His high BBIQ ensures he’s usually in the right spot on both ends. Would both sides be interested in continuing this relationship past 2021? We’ll find out more as this wasted season comes to a close.

White has had a barnstorming close to the season, seeing an increased opportunity on ball (partially due to LaVine missing games). Everybody knew how capable he was getting his own shot off the dribble or as a spot up shooter. What we need to see more of is Coby running an NBA offense in half court settings.

The time has come. Now that the Bulls aren’t in playoff contention, Boylen should slide Coby White into the starting lineup and allow him to run the offense like a real primary playmaker. Coby has shown flashes of being able to make the right read in P&R and deliver the pass on time and on target, but developing his skill set as a passer will prove crucial to achieving his ceiling in the league.

Can the “Suite Life of Zach and Coby” pairing play sufficient defense to let them go to work on the offensive end? How can these two balance the time each spends on the ball to create the most efficient opportunities? It will be critical to see if the young guards can play together without stepping on each other’s toes, especially with a draft full of primary ballhandlers in LaMelo Ball, Killian Hayes, and Tyrese Maxey as potential options in a limited draft class.

While the Bulls haven’t achieved what they wanted this season, there’s still time to glean valuable observations from the remaining games. Wendell, Lauri, Zach, Otto, and Coby have plenty to show going forward and the chemistry these five build down the stretch could prove crucial for making another push towards relevance in 2020/21. At worst, the remaining games will give whoever is making the decisions next year more data to consider when making choices about what is to come. 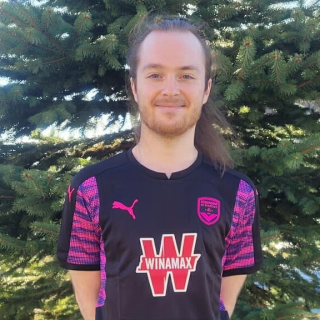 I’m Evan Zaucha. I’m a University of Illinois neuroscience graduate and former neurodevelopment lab scientist who enjoys using the scientific method to delve deeper into the intricacies of basketball. I’ll cover anything from prospect scouting, to roster construction, to breakdowns of current NBA players’ games. I’m interested in learning more about motor skill acquisition, pattern recognition, building predictive NBA statistical models, and looking at the game through an analytical lens.